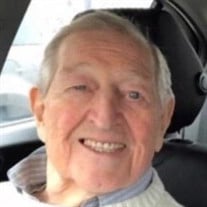 Sam Trachtenberg passed away on May 31, 2020 at age 93. Beloved husband of the late Jean Brinkworth; Father of Sandra Trachtenberg, Evan Trachtenberg (Maria) and Gary Trachtenberg (deceased). Stepfather of Patrice Weiman (Jim Mate), Timothy Weiman,, Ellen Johnson (Greg), Peter Weiman (Nancy) and John Weiman. Grandfather of Elizabeth, Steven, Avia, Emily and David. Step-grandfather of Madeline, Kelly, Kevin, Meghan, William, Emily, Kevin, Daniel and Kyle. Sam was born in New York City on October 20, 1926 to Benjamin Trachtenberg and Esther (nee Seelig). He grew up in the the Bronx with his late sister, Judy Rasher. As a boy, he loved to play stickball in the streets. It was during this time that he established a lifelong passion for sports, especially for the New York Yankees. Sam enlisted in the Navy during World War II and served as the quartermaster for the USS Marlboro. After completing his military service, he enrolled in the first co-ed class of Hunter Collage where he met his first wife, Bettina Schuster. They moved from New York City to Teaneck, New Jersey and raised three children together. During his free time, Sam managed a local little league team and taught bridge classes. He worked as a salesman for 25 years at Milprint, Inc. before starting his own company, Uptown Packaging. In 1979, he returned to New York City, where he met and later married Jean Brinkworth. Sam and Jean shared a love of boating, spending their leisure time cruising the waters around New York City. They moved to Rocky River, Ohio in the early 2000s, and Sam would often say that he was "the oldest player on the Rocky River Senior softball team." Sam and Jean were married for 18 years. After Jean's passing in 2007, Sam met Sally Stack. He enjoyed spending the last ten years of his life by the lake with Sally and her son, David. Sam was a kind-hearted man who will be dearly missed by both his family and friends. Arrangements will be announced at a later date.

The family of Sam Trachtenberg created this Life Tributes page to make it easy to share your memories.