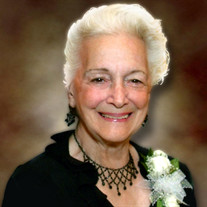 Rose Marie Dworken (nee Feleppelle), age 95; beloved wife of the late Leo M. Dworken; loving mother of Steven D (Bobi, deceased), Linda R. Wright (John C.); step-mother to Jacqueline Rubenstein (Alva, both deceased), Sharon Biarsky (deceased) (Jerry), Ellyn Kless (Dennis), dearest grandmother of Korrin M. Ziswiler (Oliver) and loving great-grandmother of Logan, Landon, and Lilah; sister of the late Frank Feleppelle and the late Mary Kassouf; beloved great aunt, aunt, cousin and dear friend to many. Rose passed away on June 1, 2017, very gracefully and peacefully surrounded by loved ones. Rose was a well-renowned business woman, owner and operator of three businesses during her lifetime. Two involved her passion for cosmetics. She was well-respected and admired by many because of her strong work ethics and compassion for other people. Later in her business career she became the director of cosmetics of Boston Distributors, which was located on Rockside Road, and eventually became the Vice President of Cosmetics before retiring in her 70’s. After her beloved husband Leo’s death, she found a passion for ballroom dancing at Arthur Murray’s, then later followed her wonderful dance teachers when they bought American Dance Exchange on Wilson Mills Road. She truly was beauty in motion. Her style and grace showed in all of her routines, winning her many trophies and awards in dance competitions. Her grace, compassion, intelligence, kindness, patience, determination, strength and respect of others were many of her wonderful qualities. Although her career was a tribute to her fortitude, her biggest joy in life was for her children and her family. The family is having a private committal service at Bet Olam Cemetery and is planning a public memorial service to celebrate her life later in the month. Contributions may be made in her name online (hospiceofdayton.org/donations) or by mail to Hospice of Dayton, 342 Wilmington Ave., Dayton, Ohio 45420.

The family of Rose Marie Dworken created this Life Tributes page to make it easy to share your memories.