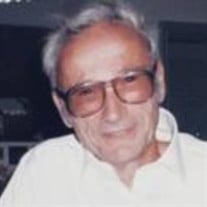 Jack Lichtenstein, 98, passed away Jan. 17, 2021, at his home in Cleveland Heights. He was born in Steubenville and moved to Cleveland with his family when he was 5. Always an optimist and positive thinker, he lived his life according to one of his favorite sayings, “Let gratitude be your attitude.” His priority was to make others happy, which dove-tailed with his having a huge repertoire of witty jokes that would take driving the length of the Pennsylvania Turnpike to tell. He actually did that. In retirement, he was proud of his decade of volunteerism at a Cleveland kidney dialysis center, where he visited and read to patients. An avid reader, Jack was a reading specialist and one of the first to teach remedial reading to elementary classroom teachers during summer sessions at Case Western Reserve University, Baldwin Wallace University and St. John College. An Ohio State University graduate, he earned his Ph.D. in education from CWRU. He began his career teaching sixth grade in the Euclid City School District, joining the Cleveland Heights-University Heights School District two years later. During his tenure there, he was reading supervisor and principal of Boulevard and Taylor elementary schools. As a World War II veteran, he served five years in the military, attaining the rank of first lieutenant as a paratrooper. His first wife, Diana Gleisser, met an untimely death due to cancer, leaving him with four young children. All adored and admired him for his wisdom and wit: Bob of Boston, David (Donna Schmalberger) of Denver, Colo., and Amy Samet of Austin, Texas. He was preceded in death by his oldest son, Ted. In 1964, he married Lois Cooper. The couple celebrated their 56th anniversary last Thanksgiving Day. They spent the past 20 winters in Estero, Fla., where Jack thrived on sunshine and became a legend in their community for playing water volleyball into his 97th year. He also is survived by three grandsons, Max Lichtenstein of Santa Cruz, Calif., Nick Samet of Austin and Vaughn Moore of Denver; nieces, Sylvia Biarsky and Barbara Rose; nephews, Lawrence Stern and Bob Rose (Carolyn Cappel); and three younger generations of nieces and nephews. He was predeceased by his sisters and their husbands, Ann and Alvin Friedman, and Gertrude and Will Peters; a niece, Sara Behar; and nephew, Barry Friedman (Flo Friedman). Jack also leaves three treasured Cleveland Heights friends, Kristen Fragassi, who livened his last three years gardening with him and sharing hours with him on musical “Dates with Alexa,” and with her husband, Dr. Phil Fragassi, and Strawther McBain, their frequent impromptu visits brightened his life. Jack’s family is grateful to Katie Tipton, his Kendal at Home care coordinator, who provided him with smiles and cherished caregivers Gannie Jackson, Sue McElligott and Nita Sendin, who were his “wheels,” taking him out and about town for fun afternoons. Given his love of books, those who wish may contribute to Friends of the Cleveland Heights Library. No visitation because of COVID-19. The family plans to celebrate his 99th birthday this summer.

Jack Lichtenstein, 98, passed away Jan. 17, 2021, at his home in Cleveland Heights. He was born in Steubenville and moved to Cleveland with his family when he was 5. Always an optimist and positive thinker, he lived his life according to one... View Obituary & Service Information

The family of Jack Lichtenstein created this Life Tributes page to make it easy to share your memories.