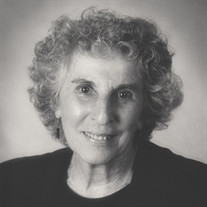 BEATRICE S. SILVERBERG (nee Friedman), age 100, beloved wife of Lou (deceased) died October 12, 2019. Loving mother of Rowan, Mark (Barbara), Kathie Lester and Deedee Paster, all of Cleveland, and Kira (Charlie Alolkoy) Freed, of Tucson, AZ. Cherished grandmother of Nehemiah Stark, Chelsea Woods, Hannah (Jay) Mraz and Joe (Sonya) and Danny (Jennifer) Paster. Great-grandmother of Maya Woods, Alex Bernstein, Michael, Bobby and Jillian Paster. Dear sister of the late Eleanor Magilavy. After growing up a tomboy and avid student Bea attended Akron University, majoring in history and English. Upon graduation she received a scholarship from the John Knight Foundation to further her education. Bea went on to earn an M.A. in Modern European and Russian History from the University of Chicago. After graduation in 1941, she worked in Washington, D.C. in the Office of Coordination of Information, Near East Division (COI - later the OSS) and other war-related agencies analyzing the supply of strategic war materials of the Axis powers in Europe. At the end of WWII she worked for the United Nations Relief and Rehabilitation Administration (UNRRA) mission based in Belgrade, Yugoslavia and worked there with great enthusiasm as an economist analyzing needs for relief materials. When her mission ended in 1947, at the beginning of the cold war, she moved to New York City where she engaged in progressive political work in New York and the coalfields of West Virginia. Bea lived her life dedicated to egalitarian activist ideals and feminist goals, committed to building a world based on peace and nonviolence. Included in her work and endeavors were as a Social Researcher for Case Western Reserve University Department of Sociology and in numerous projects related to the "War on Poverty". For many years she was Family Coordinator of Headstart in both Cleveland and Ashtabula. In Ashtabula she helped found Homesafe, a domestic violence and abuse shelter for battered women, which still exists today. Bea lived and loved for many years in the Ashtabula River valley, walking along the frozen ice, swimming in its wave pools, scanning for wildlife, and enjoying the surrounding wildflowers and birds, particularly the great blue heron. The freedom she found in this pristine river valley inspired Bea and Lou to hold communal classical music concerts, many benefitting non-profit organizations, in addition to folk dances, bonfires, and memorable gatherings of family and friends. Bea became a sculptor after the death of her husband Lou in 1991 and had her first public art show at age 90. She greatly enjoyed writing and created moving essays, mostly autobiographical, many of which are included in her book, "Mosaic and Memory: My Life Then and Now," published in 2018 when she was 98 years old. Friends who wish may contribute in Bea’s memory to Women’s International League for Peace and Freedom (WILPF), PO Box 13075, Des Moines, IA 50310 or ACLU of Ohio, 4506 Chester Ave., Cleveland, OH 44103. Memorial Service on Sunday, November 17 at 12:30 PM at The Music Settlement, 11125 Magnolia Drive in University Circle.

The family of Beatrice S. Silverberg created this Life Tributes page to make it easy to share your memories.